Leica Photo Story #1 – A Nightwalk through the City of Science 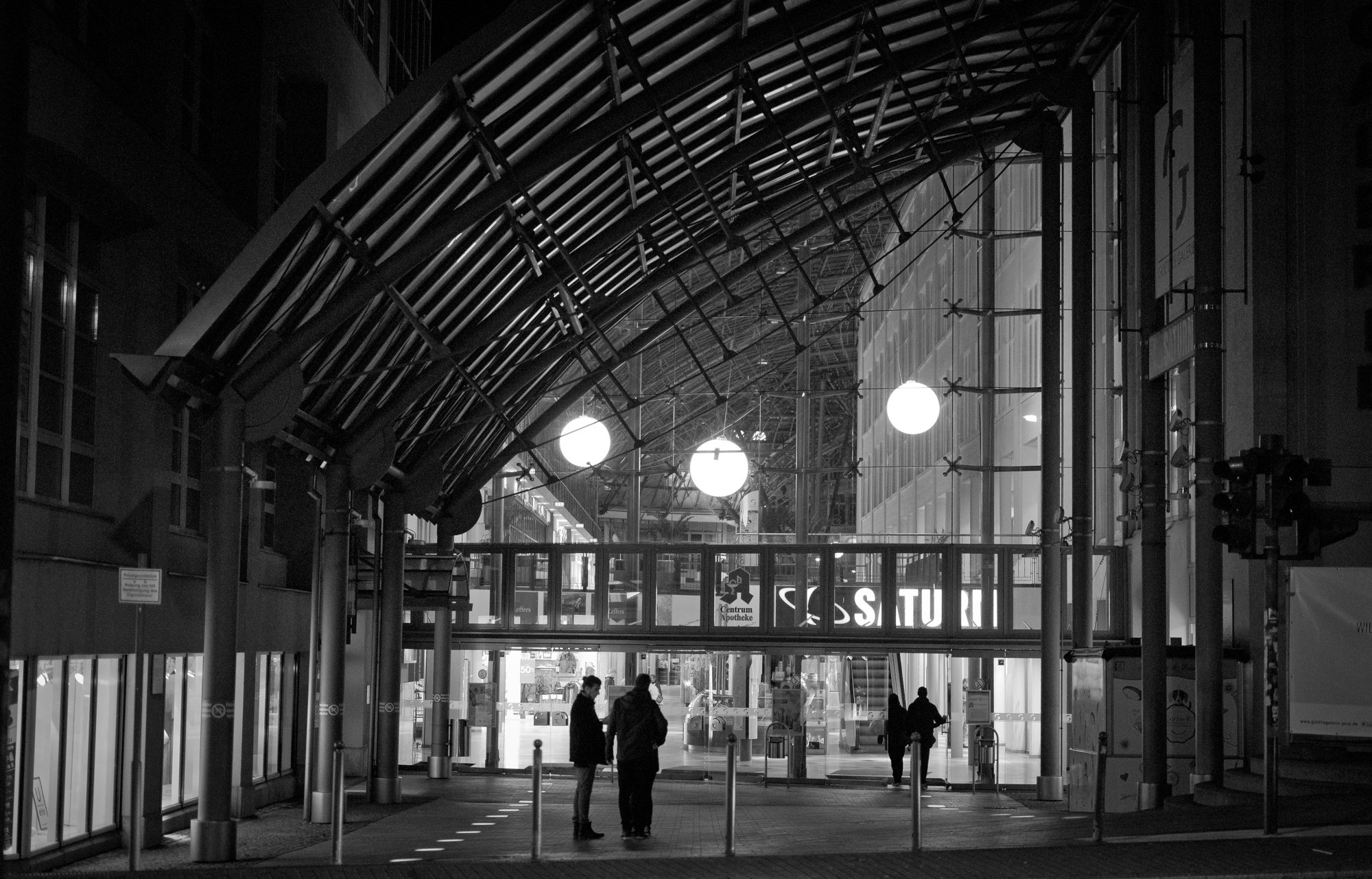 It was one of the spontaneous moments in my work as a passioned leica photographer that led me to the decision, to visit this interesting city, called „Jena“. It is not far from my home, just 1 hour by car. Jena has around 100.000 inhabitants and is located in the state Thuringia of Germany. The day of my trip was a rainy Saturday evening in february. 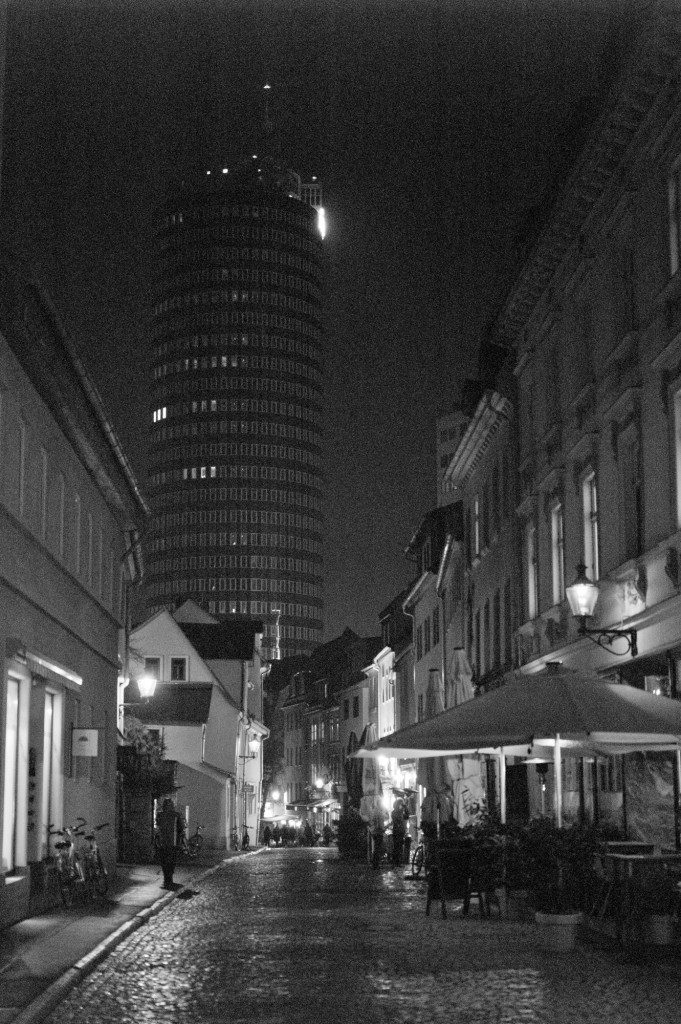 In general i love photographing in rainy nights. It is very inspiring and gives every picture a romantic and emotional touch. For me it is like the sound of silence when the rain drops are splashing on the ground. I am becoming quiet and looking through the viewfinder has a timeless feeling. In such an environment i am more connected to the life on the streets. 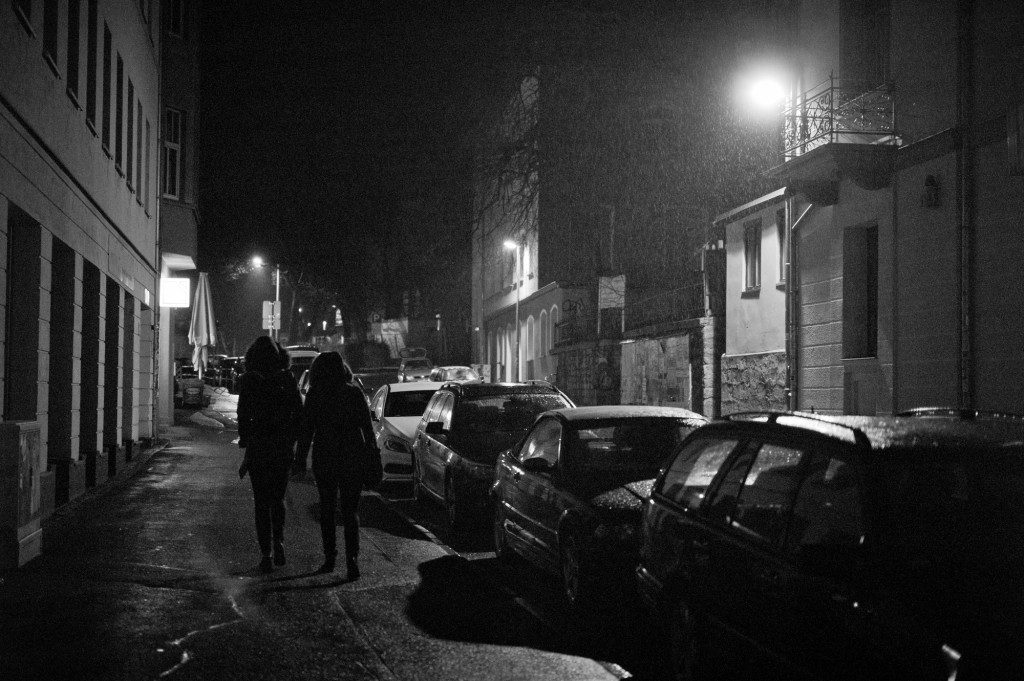 Just around 11 o’clock i arrived there and drove directly into the heart of the city of science. I started my Nightwalk at the „Holzmarkt“ and came to a place with very interesting light. People were walking out of deep shadows into the light oft he „Ernst-Abbe-Platz“. 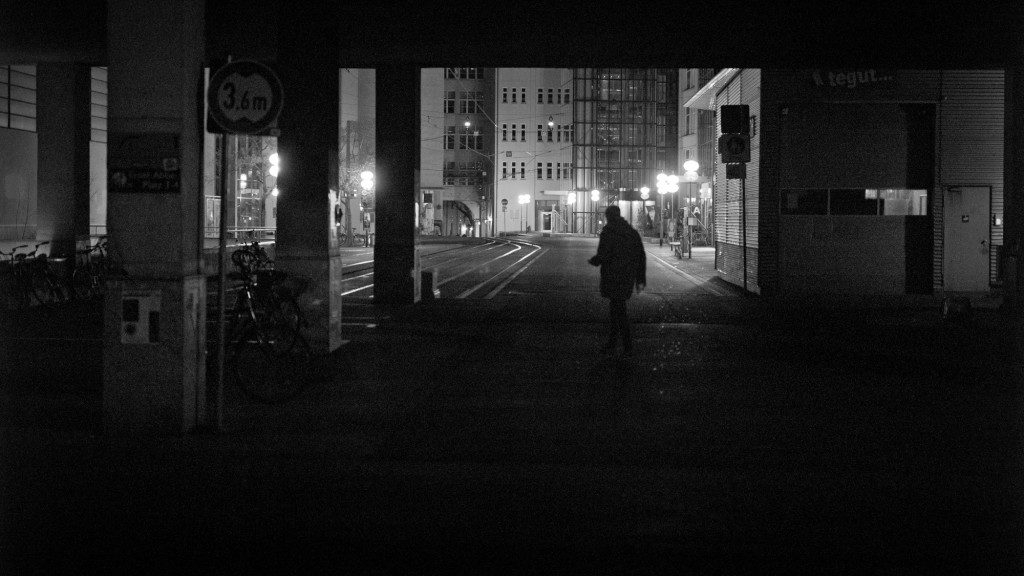 The Man in the Shadow at Ernst-Abbe-Platz

Ernst Abbe was a multitalent in physics and optical science. In the 19th century he was one of the heads that created groundbreaking basics in the optical science and developed complex optical instruments. A lot of public institutions and places bear his name. For example the local university is called „Ernst-Abbe-Fachhochschule“ and the soccer arena „Ernst-Abbe-Sportfeld“. That shows the importance Ernst-Abbe still has in these days. Todays scientists are working with his findings and professors are teaching students on the base of Ernst-Abbe’s knowledge. 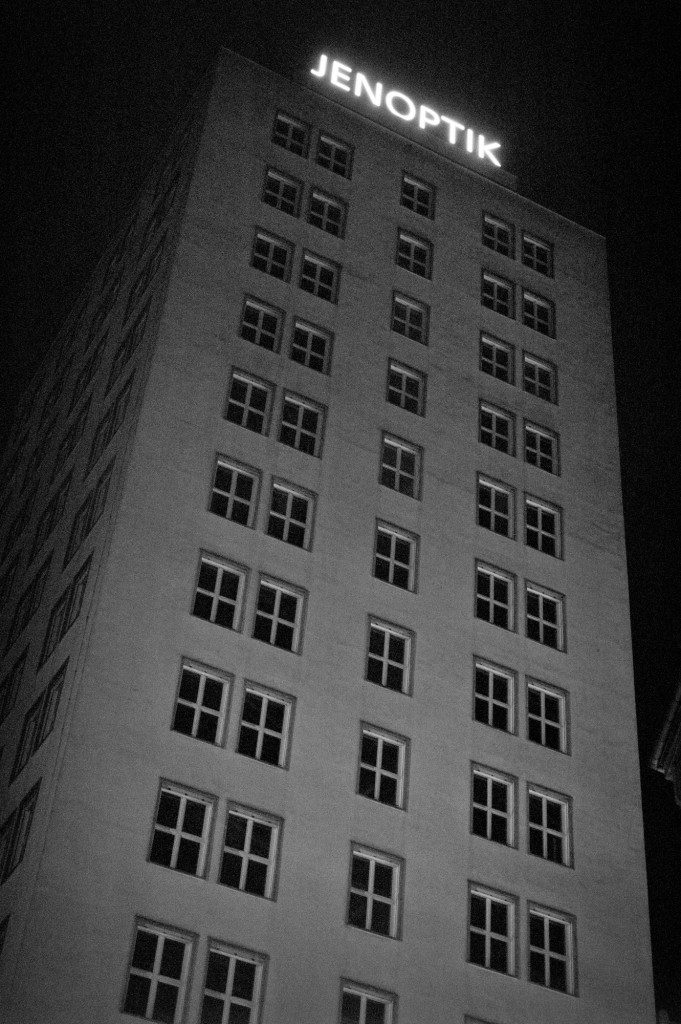 When i turned to the left i saw the „Jenoptik“ Tower. Jenoptik is one oft he global players in the optical industry that was founded in Jena. The history of Jenoptik goes back to 1846 when Carl Zeiss opened a small factory for mechanics and optical instruments. Carl Zeiss was a businessman with skills in mechanics and deeper interest in optical science. In corporation with Ernst-Abbe he constructed the first optical glasses that were just based on scientific calculations. The theoretical background of these calculations was delivered by Ernst-Abbe. So in summary we can say that the basics of all these fine lenses we are using everyday go back to Carl Zeiss and Ernst-Abbe, who have their roots in Jena. That is one big reason why Jena is called the City of Science. 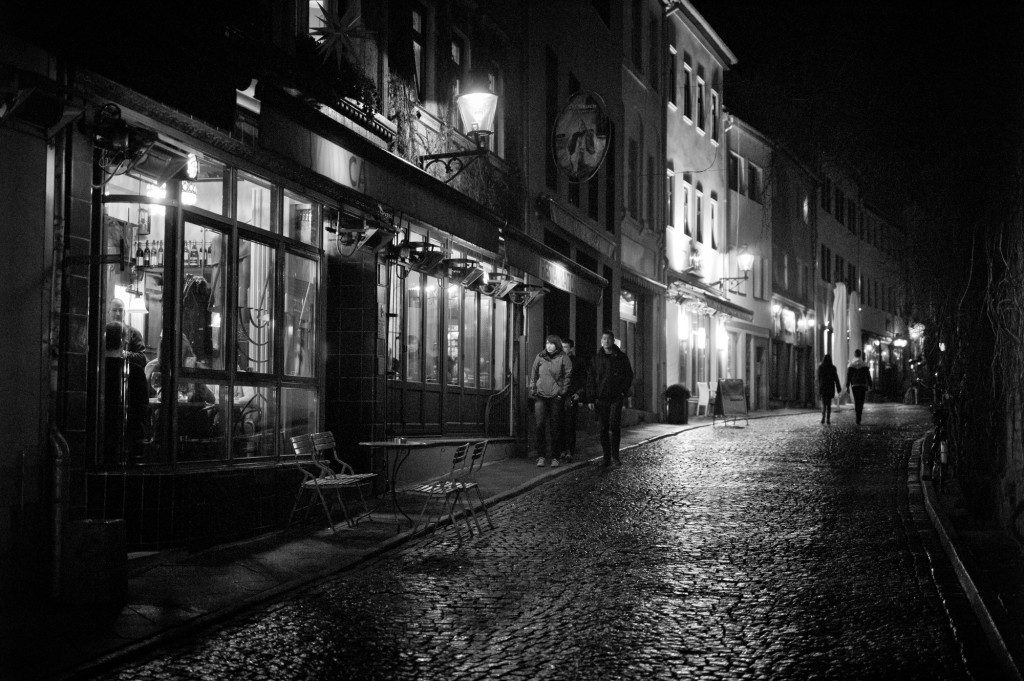 After i left the „Ernst-Abbe-Platz“ i turned into a the very famous street – the „Wagnergasse.“ This street is the heart of the nightlife in Jena with a lot of cafes and bars. Some of these Cafes have a long history and are frequently visited by the 20.000 students and people from all over the world. When i took some photographs in this street i felt like in the 50s with romantic light that was shining through the windows. This scenery was crying for black and white photography and in this aspect a perfect application for my Leica Monochrom. Combined with the 50mm APO-Summicron the pictures got such a classic look and feel. 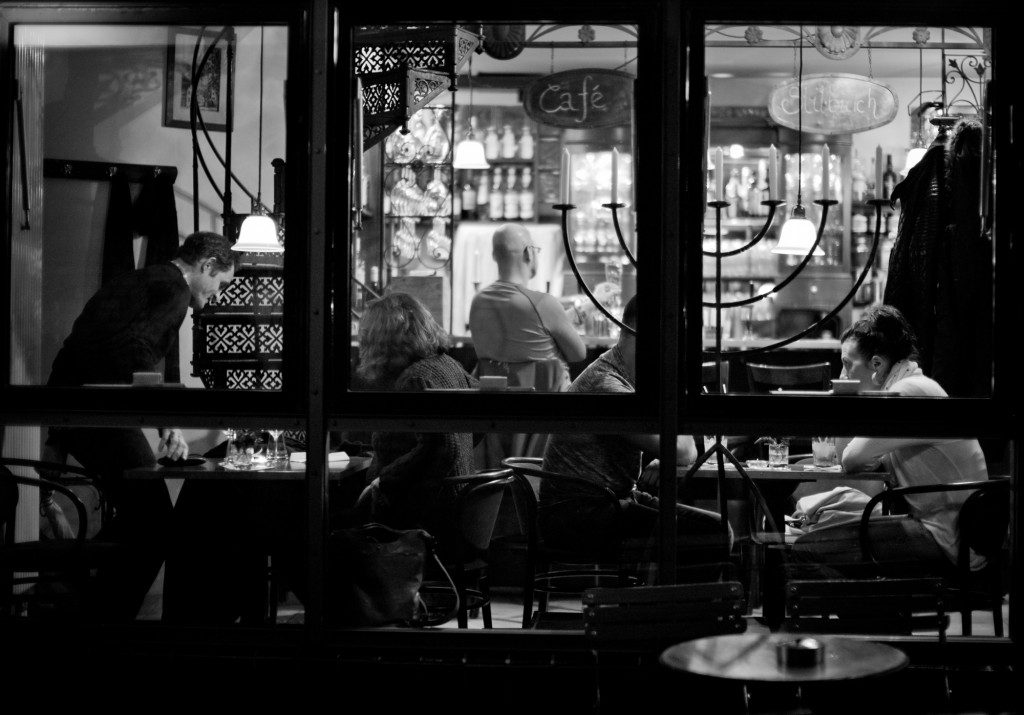 Overall it is a very interesting feeling to photograph in a city that has a long cultural history on one side and is a big player in science and industry on the other side. Jena has a lot of different faculties on the university, a high number of other academies and is a worldwide leader in medical research. The university hospital is one oft he biggest and most modern in europe and there are developed forms of therapies and methods which are used on the whole planet. 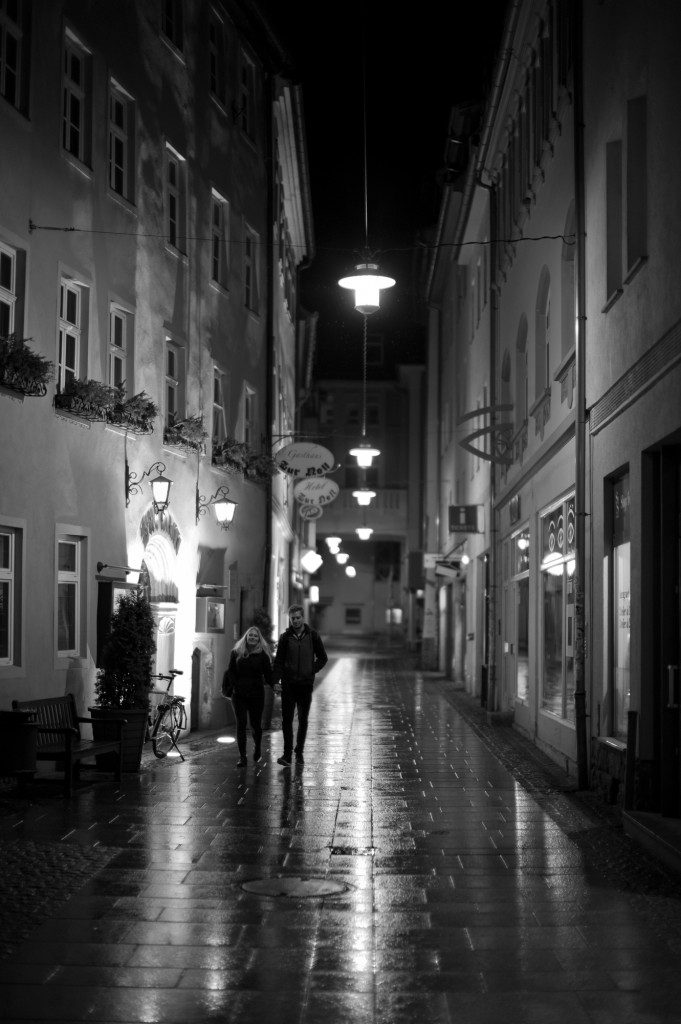 One of the narrow Alleys in Jena.

But in the end just the light and the people on the streets are the most important reason why i travel to different cities. What i loved about Jena were the very different light settings on a relatively small area. One example is the shopping mall „Goethe Galerie“ in the center of Jena with it’s modern architecture and light installations. But i also loved the light in these narrow alleys surrounded by historic buildings. My most inspiring moment i had on the end of my nightwalk when i was photographing some people on their cycles who where driving through the rainy night and how the light reflected on the wet ground. 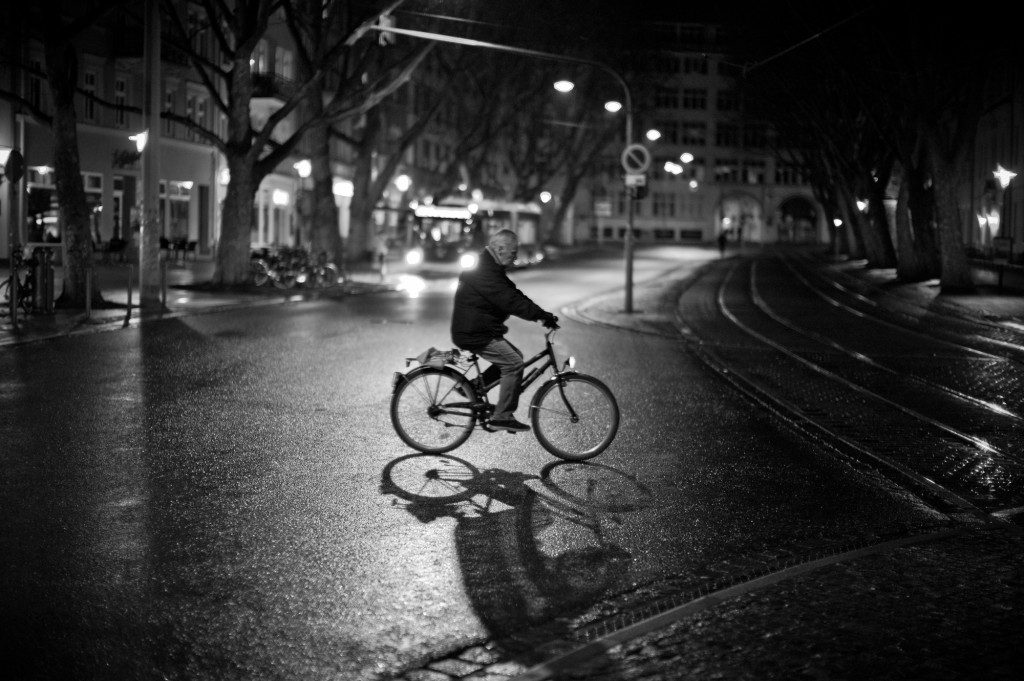 Cyclist stearing through the rainy Night

I hope you enjoy the photographs and i can recommend you to visit this beautiful city in the middle of germany. On my nightwalk i worked with the Leica M9 Monochrom and the lenses Leica 50mm Noctilux ASPH f/0.95 and the Leica 50mm APO-Summicron ASPH f/2.0. 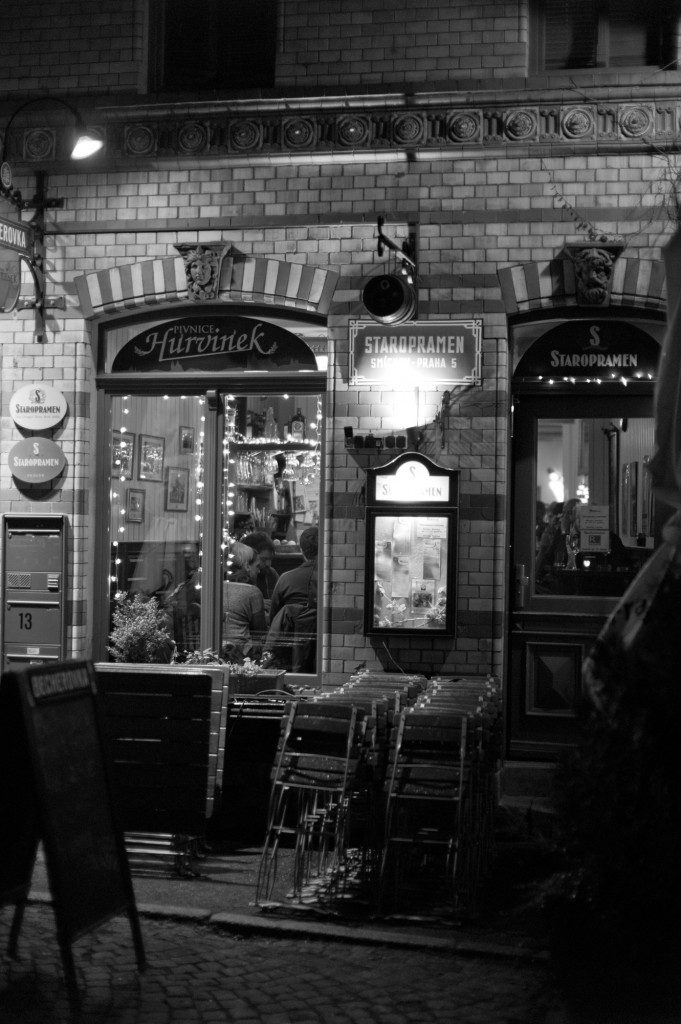 Lovely Bar in the „Wagnergasse“ 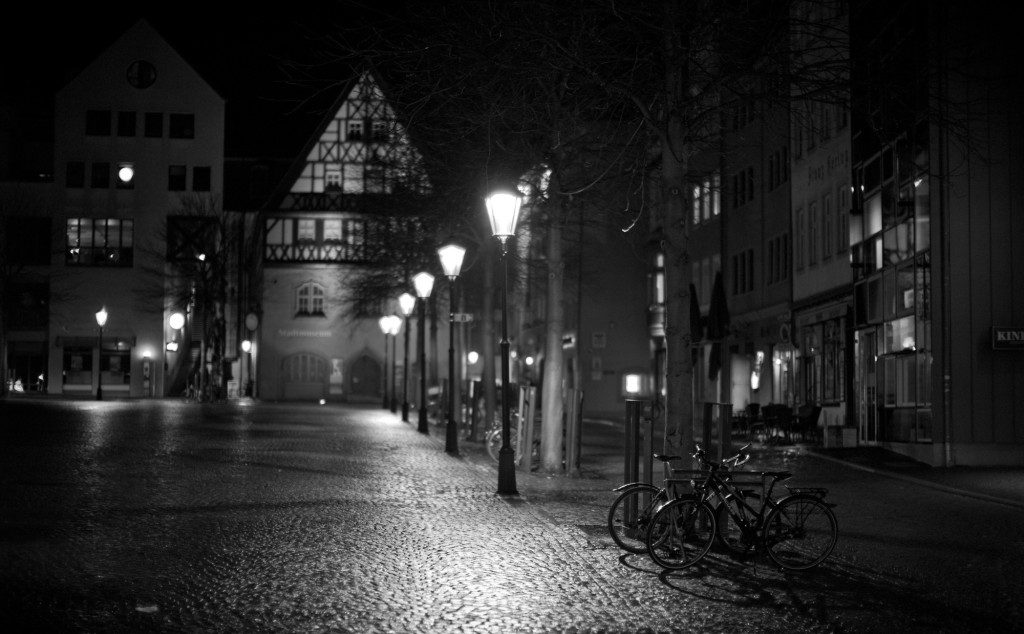 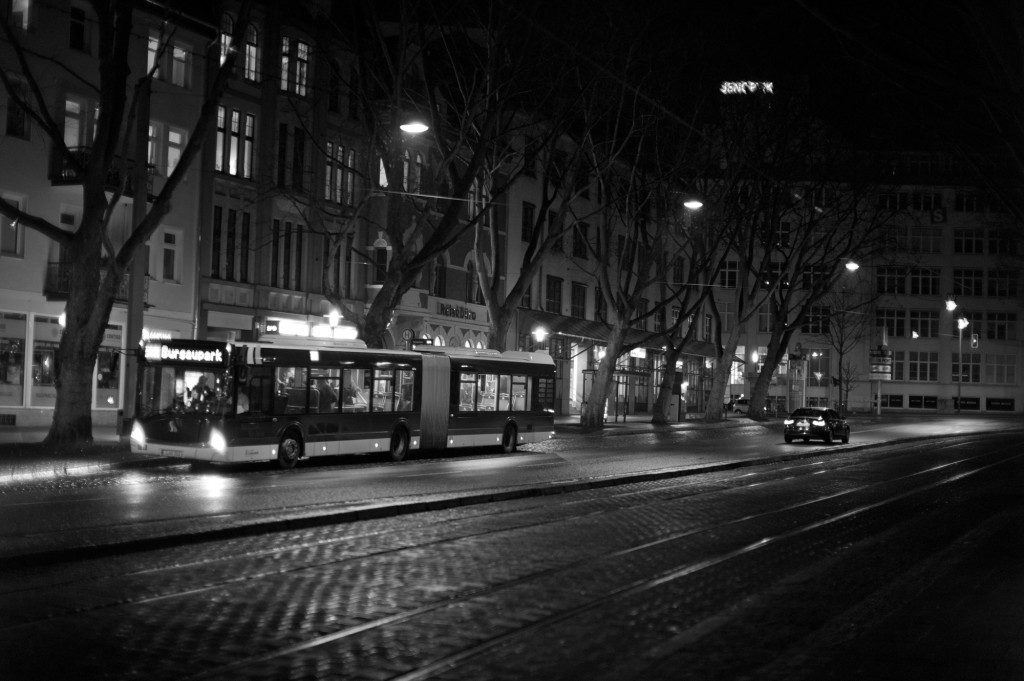 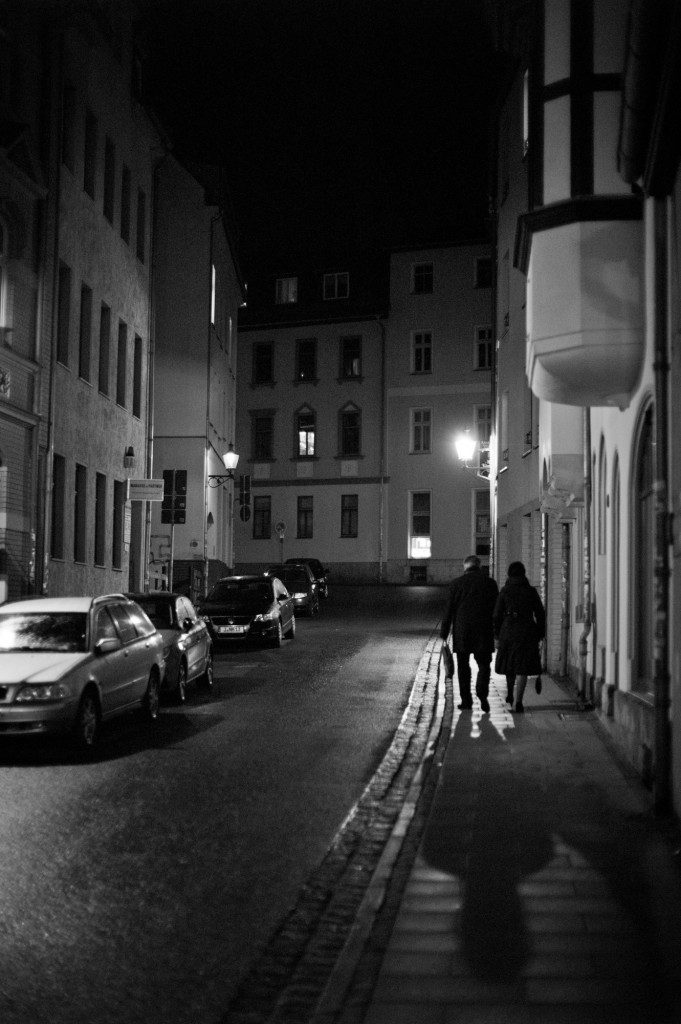 Walking home after a long Night 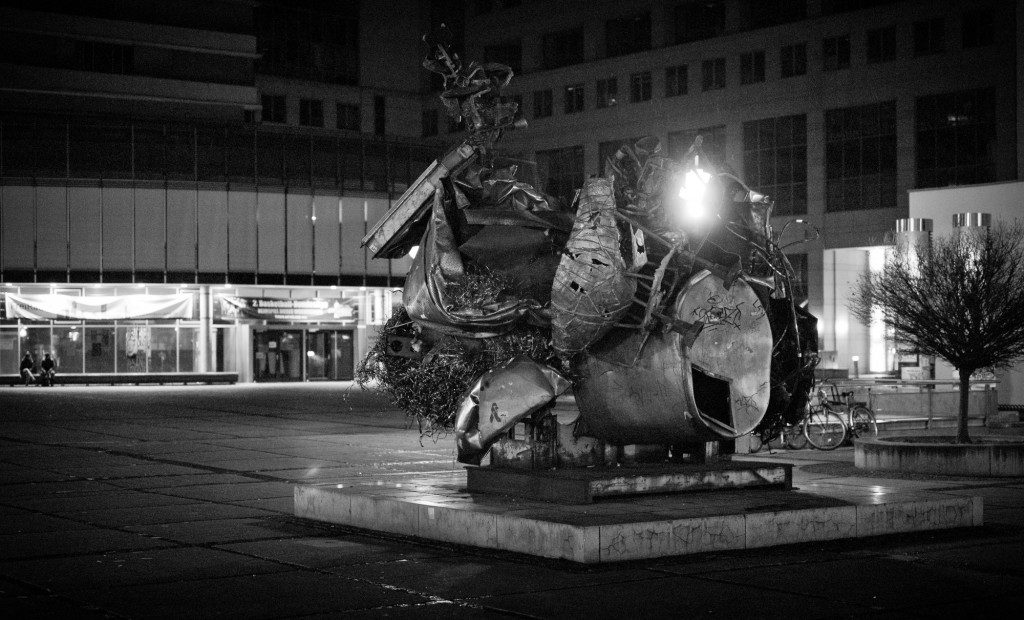 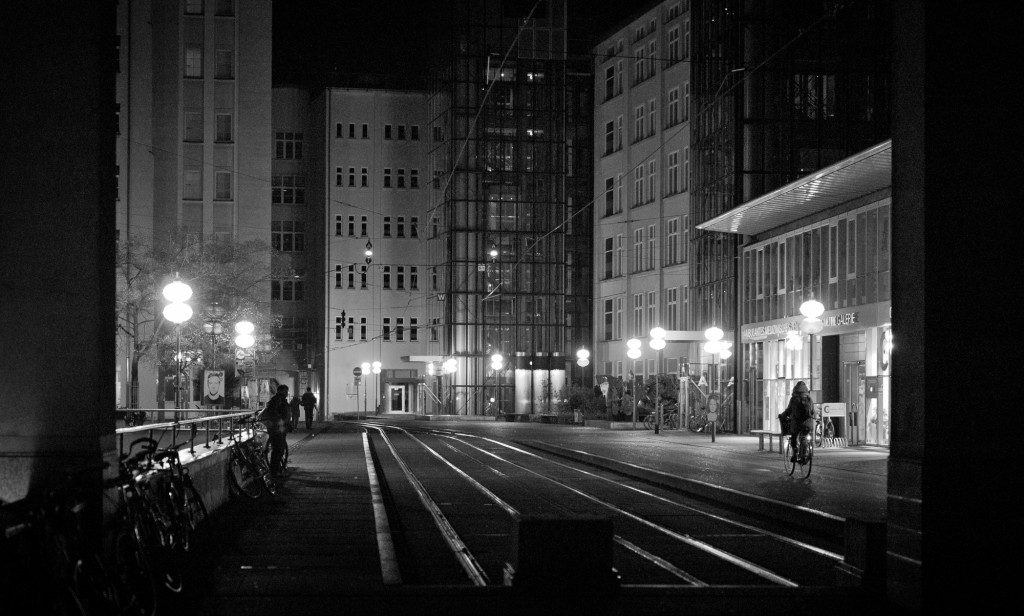 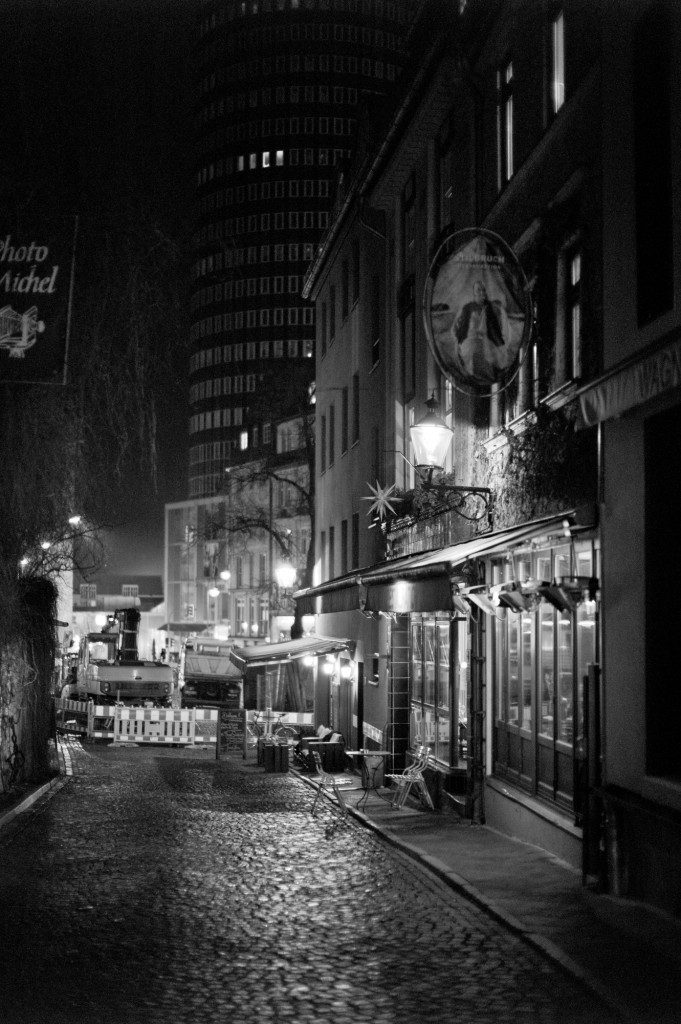 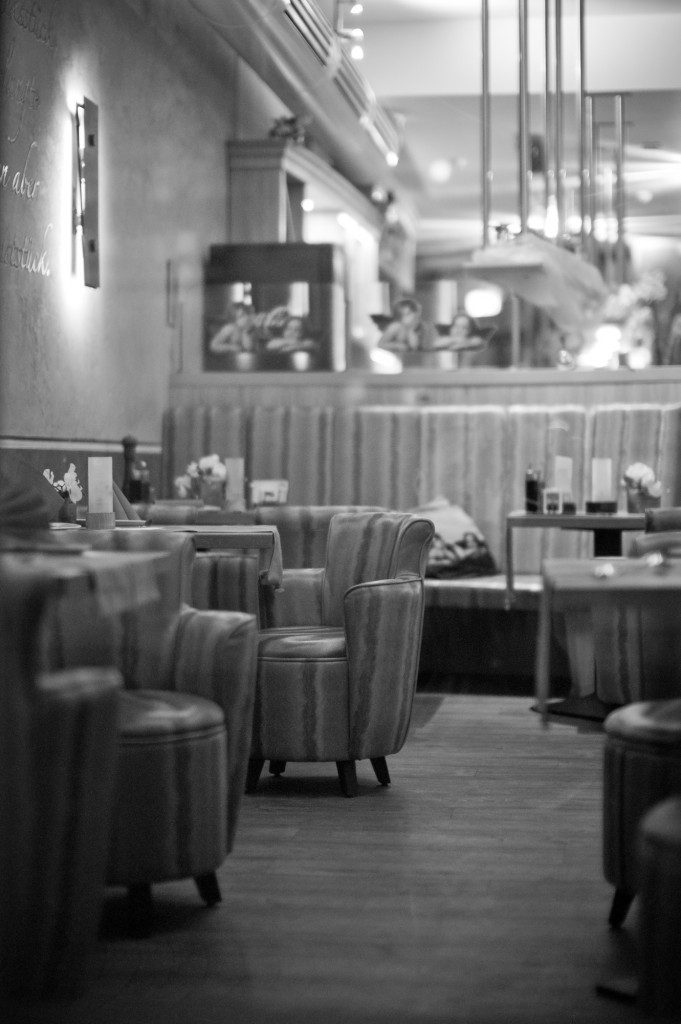 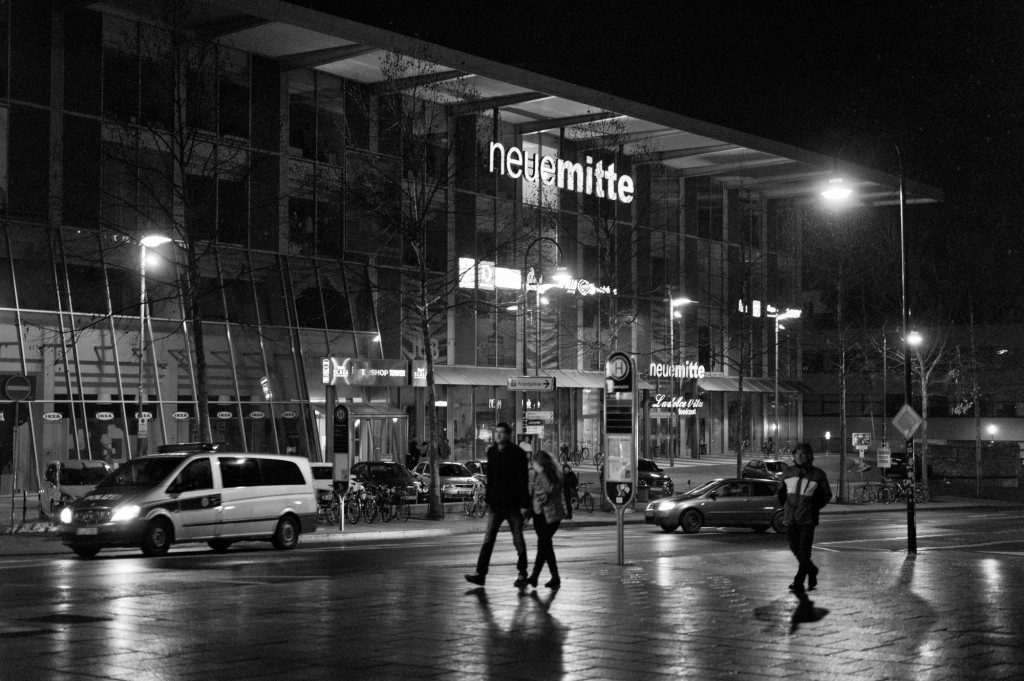 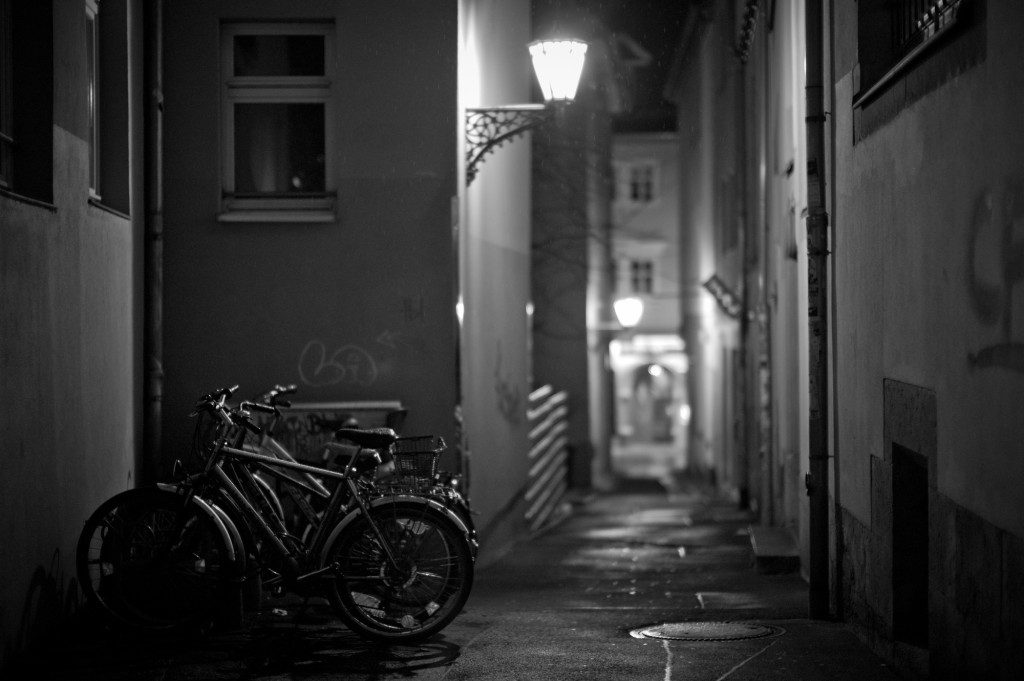